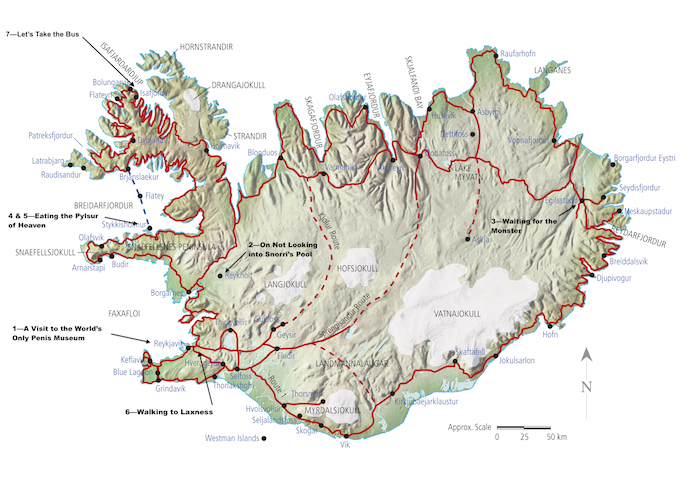 I visited Iceland earlier this year. I don’t think I’ve ever wanted to return somewhere so much. I really enjoyed this three-part piece in McSweeney’s by Kurt Caswell:

Everybody knows that train travel is superior to all other modes of getting from here to there, except for travel by foot (“It is rich in details,” a Hungarian friend told me, who was walking around the world), and perhaps travel by camel (the romance of the Silk Road, of course), and maybe by canoe (because canoes are a kind of poetry). So except for those three, trains are superior. But then, I also love my diesel pickup with its eight-foot Alaskan camper. So, except for those four, trains are the best. And the list of great wanderer/writers who love trains is long indeed. “Trains are for meditation,” writes the late Scottish poet Alastair Reid. “I like trains,” writes Australian writer Anna Funder. “I like their rhythm, and I like the freedom of being suspended between two places, all anxieties of purpose taken care of: for this moment I know where I am going.” The 1982 Nobel Laureate, Gabriel Garcia Marquez, called the train, through one of his characters, “a kitchen dragging a village behind it.” And novelist and travel writer, Paul Theroux, a man well-known for making long journeys by train, writes, “Ever since childhood . . . I have seldom heard a train go by and not wished I was on it.” Because “I can’t make my days longer,” Theroux muses, “… I strive to make my days better.” That’s beautiful, if you hadn’t noticed, words to live by it seems, and one way to make a day better is to travel by train.

But Scott and I were traveling in Iceland, and Iceland doesn’t have any trains. I don’t know why not, when the famed Ring Road circumnavigates the entire country, and seems a likely, even obvious route for a train. Imagine how many happy tourists (some of them wanderer/writers) might more happily part with their money while riding the train around the island. Local communities on the Ring Road Railway (surely someone has thought of this already; but if not, I get credit for that name) could decide if they wanted to build track outward from the ring to various fabulous local destinations. A circular rail line then, with rays emanating into the peninsulas, not unlike a flower with its petals. That too is beautiful, if you hadn’t noticed. Of course, one complication is that in Iceland now and again, a volcano pops it top, and the result can be a torrent of glacial melt, especially in the south from Vatnajokull, which rushes out to sea and destroys miles of highway, along with many bridges. Perhaps Iceland decided against a rail line long ago because rebuilding all that track would be just one more expensive thing to do.

Read the rest at McSweeney’s.

On the road in Iceland