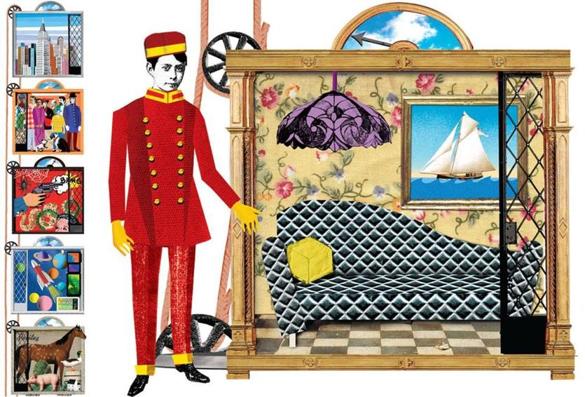 From the Boston Globe:

Elevators first arrived in America during the 1860s, in the lobbies of luxurious hotels, where they served as a plush conveyance that saved the well-heeled traveler the annoyance of climbing stairs. Initially these steam-powered “moveable rooms” were extravagantly furnished with chandeliers, benches, and carpeting, says Lee Gray, a columnist for Elevator World and an associate professor of architecture at the University of North Carolina at Charlotte. Passengers were expected to sit down and get comfortable before the operator fired up the new contrivance. “It was all about luxury,” said Gray.

It wasn’t until the 1870s, when elevators showed up in office buildings, that the technology really started to leave a mark on urban culture. Business owners stymied by the lack of available space could look up and see room for growth where there was previously nothing but air—a development that was particularly welcome in New York, where a real estate crunch in Manhattan’s business district had, for a time, forced city leaders to consider moving the entire financial sector uptown. That plan came to be seen as unnecessary thanks to the initiative of one Henry Hyde, the founder of a large insurance firm, who realized that by installing a pair of elevators in his headquarters, he could make it the tallest building in the city: seven stories and 130 feet. In so doing, Hyde ushered in a new era. As a writer for Scribner’s Magazine put it almost 30 years later, the passenger elevator turned out to be “a revolutionary agent” that did for modern building what the steam engine had done for transportation.

Advances in elevator technology combined with new steel frame construction methods to push the height limits of buildings higher and higher. In the 1890s, as Bernard recounts in his book, the tallest building in the world was the 20-story Masonic Temple in Chicago; by 1913, when hydraulic elevators had been replaced with much speedier and more efficient electrical ones, it was the 55-story Woolworth Building in New York. Quickly, the modern city assumed its present shape. As Patrick Carrajat, the founder of the Elevator Museum in New York, put it, “If we didn’t have elevators…we would have a megalopolis, one continuous city, stretching from Philadelphia to Boston, because everything would be five or six stories tall.”

The arrival of the elevator upended more than urban planning: It changed the hierarchy of buildings on the inside as well. Higher floors had once been distant, scrubby spaces occupied by maids and the kind of low-rent tenants who could be expected to climb six flights of stairs. The more important people climbed at most one or two flights, which gave brownstone-style homes, for instance, their high-ceilinged parlor floors. While the arrival of elevators didn’t change this right away—the top floor of Henry Hyde’s building was occupied by the in-house janitor—the upper reaches of buildings eventually became desirable. The elevator ushered in the end of the garret and the beginning of the penthouse, as lawyers and businessmen came to appreciate the advantages of having beautiful, bird’s-eye views and respite from the loud noises of the street. Hotel owners, meanwhile, started turning their top floor rooms into their nicest ones. They could even rent out their roofs for garden parties where guests could survey the glittering new city, all without doing a bit of work to get there.