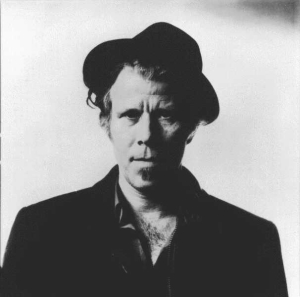 I found a great lost documentary about Tom Waits from the late 1970s recently. This piece from Interview Magazine in 1988 is perhaps even better. Here’s a sample Q&A:

Francis Thumm: What are some of your earliest memories of music and sound, and which people left a musical impression on you?

Tom Waits: Well Mario Lanza used to play golf with my dad, and my mom used to get her hair done with Yma Sumac. I went to a baseball game with Little Walter, and he told me I should get into show business as soon as possible. But I think the clearest memory I have is from when I was about 8 years old: I had a friend who lived in a trailer van by a railroad track, and his mom was enormous. I think she had got in the trailer, put on weight, and couldn’t get out. There was a lamp, a TV, and a beverage, and she always seemed to be in the same spot. Anyway, when he played, it was the first time I ever heard anybody play in a minor key, and I really recognized it as minor and was attracted to it. I still am. He taught me three chords-an A-minor blues progression-and I completely flipped. When I went to school the next day, sharing day, I got up in front of the class and played the guitar. Everybody else was sharing marbles and rocks. That was a big moment for me.

Then there was Uncle Robert. He had a tremendous rose garden, and he was a blind organist in a Methodist church in La Verne, California. In fact, after they tore the church down he took the pipe organ into his living room. I remember listening to him play the organ. And as his eyesight began to fail his performance seemed to drive into more interesting places.

Other sounds I remember: a train that went by my backyard in Pomona and my mother’s steam iron when it was boiling.

Here’s the whole thing. Read it!

The first time Tom Waits heard anybody play in a minor key and other stories
Loading Comments...