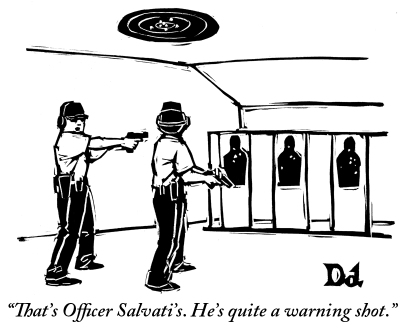 Says Kottke, Drew Dernavich sent the above cartoon to the New Yorker in 2007:

I submitted this cartoon to the New Yorker in 2007 and it was rejected. It was an almost-but-not-quite kind of idea, but worth revisiting.

I finally got around to revisiting the idea a while ago, and came up with a much simpler and better setup, which appears in this week‘s New Yorker. 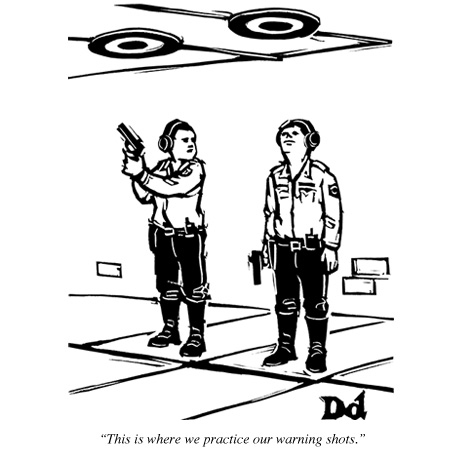 I was fascinated to learn the process that occurred in those six intervening years:

So it took six years to come up with a better cartoon for this one simple idea. The process wasn’t so simple, but as I retrace my steps in those six years, I can definitely see the formula for success. My approach was to say “whatever,” move on to the next thing, forget completely that I had ever done this cartoon in the first place, go to sleep, get up the next day and drink coffee, eat and drink as I usually do, work at some stuff, work at some other stuff, get up earlier some days and later some days, do social things every once in a while, try to eat healthy, go on vacation, waste time on the internet, try to lead a normal life, try not to lead a boring life, go to the doctor, return my DVD copy of the Wire Season 3 Episodes 1-2 because it was scratchy, decide to sign up for honors points at hotels in case I ever need to use them but then forget what my password is, have my appendix explode, have a bunch of relationship problems, drink a bunch of Shiner Bock one summer for some reason, go to a baseball game at Wrigley Field for the first time, buy long-sleeved shirts in the springtime when they’re cheaper because stores are trying to clear them out, do a Vine video, Google “Murray Head” because I didn’t know he was the guy who sang “One Night in Bangkok” because who needs to know that information, get rid of a bunch of books I don’t need anymore, upgrade my phone, and then wake up one day and then think “hey – I have a funny idea about warning shots that’s better than the one I had several years ago.”

This process was all pretty intentional, and it worked so well that I’m going to use it for every cartoon I do that gets rejected. But I don’t want to be protective of it. I’m happy to share this process with you for you to use in your work as you see fit.